This year’s Grand Marshals are those who served in the Armed Forces of the United States during the Vietnam War.  Official dates of service are 1 November 1955 to April 30, 1975.

Grand Marshals in the Daisy Mountain Veterans Parade have no special responsibilities (such as speech making or public appearances) all you have to do is show up on Parade Day, 5 November 2022, sit on your float and wave to the crowd.  We will provide breakfast on Parade Day and a ride to your parade float.  We will also provide a ride back to your vehicle after the parade is done.  You will also receive a Grand Marshal hat as a memento of your parade participation.

Entries may be made by filling out the following form, but all forms must be completed by Saturday, 22 October 2022 in order for you to be a Daisy Mountain Veterans Parade Grand Marshal this year. 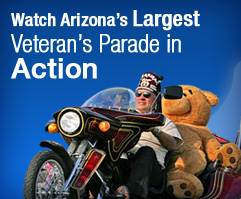